After 265 National Team games, she ended her career after the 2009/2010 season. Today, she runs a summer hockey school for girls, runs mini hockey camps in all of the Nordics, and designs clothes for girls- and women's hockey.

In 1998 she went to play for the Swedish Olympic Hockey Team in Nagano in Japan. The team came home with a fifth place finish, a little lower than what they expected. 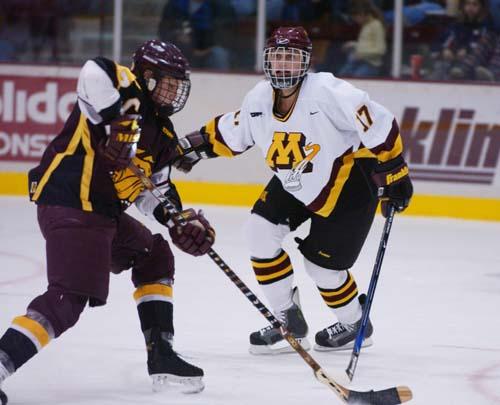 After graduation from high school she moved to Boston to play for the Assabet Valley Girls Club for one season. While there, Maria was recruited by college coaches and after five official visits she decided to sign for the University of Minnesota Duluth. That turned out to be the best decision of her life. Maria graduated cum laude with a four year bachelor’s degree in Communications, while playing world-class Div I hockey with the Bulldogs. The Bulldogs won three consecutive National Championships 2001-2003. As a result, they were invited to the White House three times to accept President Bush’s praise for their accomplishments. As the Captain for the Dogs her last two years (2002, 2003) she had the honour to hand over the team’s gift to the President.

Maria has since graduation stated, “I had the best four years of my life (so far) in Duluth, and not a day goes by I don’t miss being back in Duluth”.

During her college career she participated for team Sweden at the 2002 Olympics in Salt Lake City. Sweden landed the bronze medal after a remarkable 2-1 upset against Finland.

After graduating from Duluth, Maria went back to Sweden to play hockey for Limhamn Limeburners in the very south of Sweden, just outside of Malmö. She played for the men’s Junior 18 and 20 teams as well as for the women’s team. The women’s team ended up getting the silver medal at the Swedish Championship. The final was lost to AIK.

After playing in the south of Sweden for a year, Maria moved to the capital of Sweden, Stockholm, where she played two seasons (04/05, 05/06) for Mälarhöjden/Bredäng (M/B). They won two consecutive Swedish National Championships.

Maria was part of the Swedish Olympic Hockey Team in 2006 that beat the Americans in an historical upset in the semi-final game. In 25 previous meetings, Sweden had never even managed a tie against the Americans, outscored 187-29 in the process. Sweden won 3-2 after sudden death and penalty shots. Maria scored both goals in regulation and also the final penalty shot goal that brought Sweden into their first ever gold-medal game. Newspapers all over the world called it “The Miracle 2”, the first one being from the 1980 Olympics in Lake Placid where the American men’s team beat the Russians. Sweden lost the gold medal game 4-1 to powerhouse Canada. Maria was named to the All-Star Team and finished 5 games with 5 goals and 3 assist for 8 points.

Before the 2006/07 season Maria signed a one-season contract with AIK IF in Stockholm. Maria stated; “AIK offered me a great place to train with young and ambitious players. I am excited to add some talent and experience to this young team. I see it as an opportunity to work on my leadership and a challenge to try and bring home the gold medal to AIK in the Swedish National Championship in March 2007.” Maria started off well, winning the European Club Championship with AIK in December 2006. The season ended on a positive note with Swedish Championship Gold medal and World Championship Bronze medal with Team Sweden!

After her playing career Maria was offered to start a job in June 2010 as an Assistant Coach with the University of Minnesota Duluth in the US. The head coach at UMD was Maria’s previous coach, Shannon Miller, while the other assistant coach was Laura Schuler. Maria experienced and learned the game of hockey from the best; having stated before that “there is no better coach than Shannon Miller”. Maria dresses for practice 2-3 times a week with the team, while coaching at the same time. In May 2011 Maria decided to go back home to Sweden.

Today, Maria works as a Communicator at Lindab AB in Grevie Sweden. On her free time, she runs her summer hockey school, works as a speaker, designs her own clothing line, and sometimes works as an expert sports commentator for women’s hockey.